A stroke occurs when a blood vessel, which is carrying oxygen and nutrients to the brain, bursts or is blocked by a clot. This causes an interruption of the blood supply to part of the brain. This can damage or destroy brain cells which will affect body functions.

For example, if a stroke damages the part of the brain that controls limb movement, a person’s ability to move an arm or leg may be affected. A stroke can also affect mental processes such as how people feel, think, communicate, or learn.

The term ‘stroke’ comes from the fact that it usually happens without warning, ‘striking’ the person from out of the blue. The effects of a stroke on the body are immediate.

What can I do to prevent a stroke?

The best treatment for stroke is prevention. There are several risk factors that increase your chances of having a stroke:

The F.A.S.T. acronym was created as a helper for people to remember the main warning signs of stroke so that they can act immediately in the case of a stroke by dialling 999.

F – Face – has their face fallen on one side?  Can they 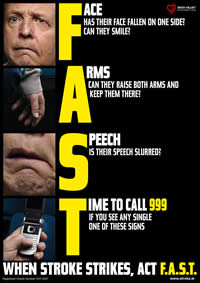 A – Arms – Can they raise both arms and keep them there?

S – Speech – is their speech slurred?

T –Time to call 999 if you spot any single one of these signs.

F.A.S.T.  can help you to rapidly recognise when a stroke is taking place and then act quickly to get medical treatment and prevent serious damage.

Undiagnosed Type 2 Diabetes in IrelandThe War against smoking in Ireland