The Irish government keep up the pressure to make us a healthier nation.

2003 – 28.28% of the population smoked 1 cigarette or more a day in Ireland.
2014 – Male and female smoking has declined to 21.55% and 17.59% respectively. (Statistics from HSE National Tobacco Control Office Health and Wellbeing Division)
Here’s why….
2004 – Ireland was the first country in the world to introduce the workplace smoking ban on 29 March.
2009 – First country in the EU to implement a point of sale display ban on tobacco. They also change the law on tobacco vending machines introducing token only sales. The 10 pack of cigarettes was also banned at this time.
2013 – Any tobacco product placed on the market must have graphic warnings
2014 – Ireland passed a bill banning smoking in cars with children.
2017 – Ireland hope to introduce plain tobacco packaging.
Cancer prevention (www.cancer.ie)
Up to 50% of all cancers are preventable, 30% are preventable through lifestyle changes alone.
Smoking is the single biggest cause of cancer, causing 30% of all cancers.
95% of lung cancers are caused by smoking.
Cigarettes contain over 4000 chemicals, 60 of which are known to cause cancer.
Half of all smokers will die from a tobacco related disease.
Research shows that 70% of smokers want to quit.
There are over one million smokers in Ireland. 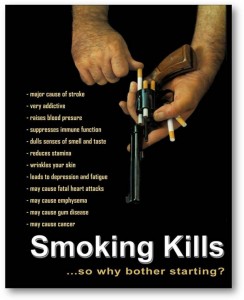 What is a Stroke?Breast Cancer Awareness